Dr Gururaj Kadkol, Durum Breeder from NSW DPI in Tamworth, travelled to Morocco in May 2017, to visit the ICARDA breeding stations and make selections to be brought to Australia.

I visited ICARDA from 2 May to 7 May, 2017.  My visit coincided with the celebrations for the 40th anniversary of the establishment of ICARDA attended by ICARDA Board members from various countries.

The visit began in Alal Tazi, a field station for cereal rust testing as it reliably produces rust diseases.  Recently, a new strain of stripe rust has been observed in this station and it is virulent on all Australian lines.  There are resistant lines in the ICARDA program.  Filippo plants his early generation nurseries here in single rows.  A significant part of his crosses are with wild species (strategy continued from Dr. Nachit’s time).  This is considered important for adaptation to environmental stresses. The general experience with such crosses in the ICARDA program is that material settles down to the normal chromosome number quickly.  Selection in early generations is for general appearance and disease resistance.

On 4 May there was a field day in the Marchouch research station, the main station for ICARDA, close to Rabat.  ICARDA Board members were the main audience (Photo).

The soils in Marchouch are cracking grey clay similar to Narrabri or Moree.  It is the main yield trial location for Filippo and Tadesse’s  programs so this was the main site for selecting lines for importing into Australia.  The 2016/17 season there was below normal due to a dry spring with yields around 3t/ha (photo).  The visual selections made here will be combined with yield information to finalise selections for import.

On 5 May we went to Settat field station where selections were made for drought, crown rot and there was also some saw fly damage.  Trials here were a mix of single rows and 6 row plots.  Due to lack of uniformity the plot trials were not informative but the single rows were more uniform and produced satisfactory selections.

On 6 May we went to Jemaa Shaim field station where sawfly and hessian fly screening occurs.  Trials here were single rows showing dramatic differences in insect resistance between lines (photo).  The best display of resistance was found in a TILLING population Filippo was growing there.  Solid stem seems to be the main resistance mechanism for sawfly.

There were many durum crops around the Jemaa Shaim field station that were being harvested.  Crops are harvested by contractors using combines but subsequent grain cleaning is conducted using manual methods (photo).  The holdings are typically small (10-15 ha) The durum grain we saw had good colour and vitreosity.  Straw is an important by product which contributes to farmers income.

The trip was of great value in establishing good contact with the ICARDA durum program and Filippo Bassi.  A list of durum lines selected for importing into Australia will be prepared based on the visual selection and yield data when received. 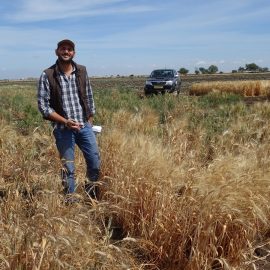 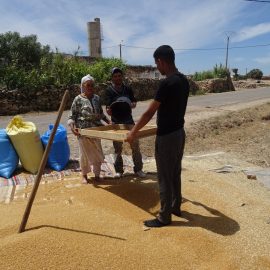 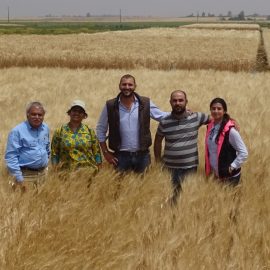