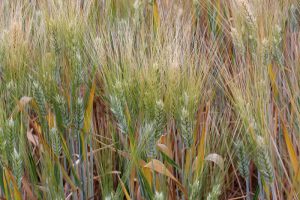 Crown rot is the single biggest limitation to wheat and barley production in the northern grains region after the cereal rusts and is also an important disease in southern Australia. Whilst crop rotation can reduce the incidence of crown rot in cereals, the length of time that infective stubbles survive in paddocks means that in many situations this is not sufficient to manage the disease adequately. Fungicides are not an effective control option.

Significant investment in screening lines for resistance has led to the development of a variety of screening technologies and to the identification of a range of partial resistance sources. The screening techniques, in adult plants as well as seedlings, have been based on the development of disease symptoms such as stem browning. Most Australian varieties are susceptible to crown rot although a few such as Sunco, Kukri and Wylie have been shown to be less susceptible under field conditions.

Where the genetic control of partial resistance in some sources has been investigated in the AWBMMP, the resistance has been shown to be complex. In addition, sources such as 2-49 have poor agronomic features which, when combined with the low heritability of resistant/tolerant phenotypes, helps explain why progress in developing resistant cultivars has been very slow. A further complicating factor has been the recent finding that at least some of the minor resistance genes are either expressed in seedling tests or in adult plant tests but not in both.

This initiative builds on recent work in the AWBMMP that identified several genetic loci that control a significant portion of the resistance in a few of the key donor lines. A combination of molecular markers, field, terrace and controlled environment screening technologies are utilised to make a new concerted attempt to transfer and pyramid some of the most promising resistances into key elite variety backgrounds for rapid adoption by the breeding programs.

This initiative is comprised of three projects:

These coordinated projects employ a range of different techniques to develop wheat germplasm in agronomically acceptable backgrounds with significantly improved crown rot resistance. All components of the initiative are firmly grounded through the active participation of commercial breeding companies.